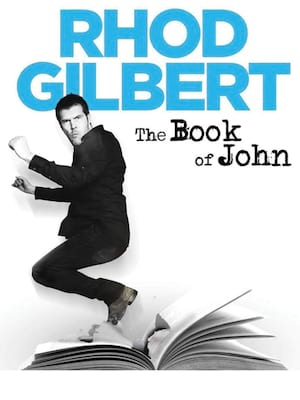 Rhod Gilbert Returns To His Roots

Hailed as one of the UK's leading stand up talents, Welsh funnyman Rhod Gilbert answered his comedy calling in 2002, deciding to give up his job as a market researcher and take a stand-up comedy course. That same year he made the finals at the Edinburgh Fringe's So You Think You're Funny competition and a whirlwind of newcomer awards followed. In 2005 he won the Chortle Award for Best Breakthrough Act and released his first-ever show 1984 - a riotous depiction of growing up in the fictional Welsh town of Llanbobl.

After doing the panel show rounds for the last six years, Gilbert returns to the stage with The Book of John. Chronicling the highs and lows of his hiatus from stand-up, the show is billed as a non-fictional account of Gilbert's recent life. After hitting rock bottom, a chance encounter with a driver named John and their daily interactions form the backbone of the show, along with with his trademark blood-boiling rants and expertly crafted jokes.

Sound good to you? Share this page on social media and let your friends know about Rhod Gilbert at Bristol Hippodrome.