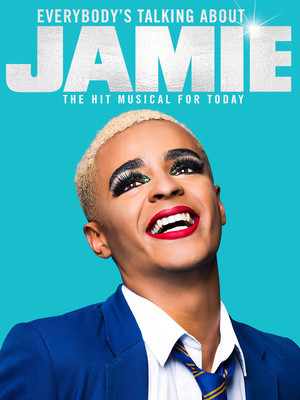 Why See Everybody's Talking About Jamie?

When this exuberant new musical from The Feeling's Dan Gillespie Sells and writer Tom MacRae premiered at the Sheffield Crucible in 2017, it became an instant success with both audiences and critics. Based on the story of Jamie Campbell, a gay 16-year-old who stunned his school by heading to prom in heels and frock, Everybody's Talking About Jamie is an infectious, funny and touching exploration of sexuality, ambitions and coming of age when you're destined to stick out from the crowd.

Ranging from upbeat pop rock to glorious soulful ballads, the show is a breath of fresh air for the British musical, sitting somewhere between the struggles of Billy Elliott and the fabulousity of Kinky Boots.

Growing up on a Sheffield Council Estate isn't plain sailing for teenage Jamie. Out of touch with his peers yet always ready with a comeback for his bullies, he's just not sure what the future holds. Supported by his wonderful mum and his tight knit group of pals, he sets out to confront his fate head on and become the star he was always meant to be.

May not be suitable for younger audiences

View all times and dates

This show is everything the world needs right now

Billed as Billy Elliot for the Kinky Boots generation, Everybody's Talking About Jamie introduces us to the newest superstar of British musical theatre with plenty of heart, wit and a fantastic score that'll spawn more than a few standards

Went to see this last night with my daughter who is 15 and just came out... more

Alex Wood: “A predictable cliche of a show”

I reckon Billy Elliot for the Kinky Boots generation just about sums up... more

Sound good to you? Share this page on social media and let your friends know about Everybody's Talking About Jamie at Bristol Hippodrome.