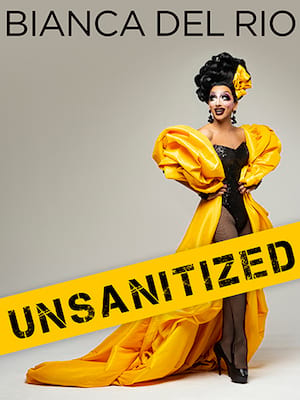 She's got bills to pay, she's got dogs to put through college, bow down to the majesty of America's funniest Drag Superstar! Bianca Del Rio embarks on her newest tour, where the Queen of the blithe put-down and 'Clown in the Gown' will be taking to a stage near you, unleashed, unadulterated and Unsanitized!

Known worldwide to audiences as the season six winner of Logo TV's runaway hit RuPaul's Drag Race, Bianca, otherwise known as Roy Haylock, won over the public with her mix of controversial comedy, excellent costume skills, and kindness, and has since gone on to tour internationally with an ever-growing following and star in the hilarious movie Hurricane Bianca and its sequel, and conquer London's West End in Everybody's Talking About Jamie. Previous to television stardom, Bianca was a cult figure on the New Orleans and New York City club scenes where she honed her act.

Sound good to you? Share this page on social media and let your friends know about Bianca Del Rio at Bristol Hippodrome.